U.S. Congressman Lauded for “Save the Bay” Initiative to Improve Waters

U.S. Rep. Reid Ribble (WI-08) was named 2016 “NEW Watershed Champion” in a ceremony on March 18 to celebrate water on Friday, for his efforts to “Save the Bay.”

Ribble was honored during a World Water Day event hosted by NEW Water, the brand of the Green Bay Metropolitan Sewerage District, and the Green Bay Water Utility. The two water entities teamed up for the third year for World Water Day (www.worldwaterday.org), a commemorative event launched by the United Nations in 1993 to bring awareness to global water issues. Globally, one in 10 people lack access to safe water, and one in three lack access to adequate sanitation (www.water.org). Water issues in Northeast Wisconsin include aging water infrastructure and impaired waterways. 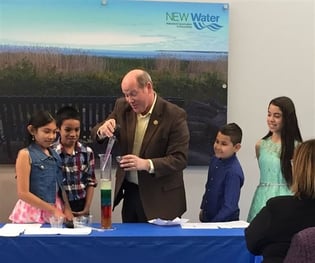 “Congressman Ribble has taken a leadership role in improving area waters with his ‘Save the Bay’ initiative,” said Tom Sigmund, Executive Director of NEW Water. “He recognizes the significant value of water to our economy, our health, our way of life. He is very deserving of recognition.” Said Nancy Quirk, General Manager of the Green Bay Water Utility: “In light of the water issues facing our nation, it is now more important than ever to realize the value of water. Rep. Ribble has played an important role in becoming educated on these issues, and helping finding solutions.”

How can you celebrate Wisconsin water? Try these ideas